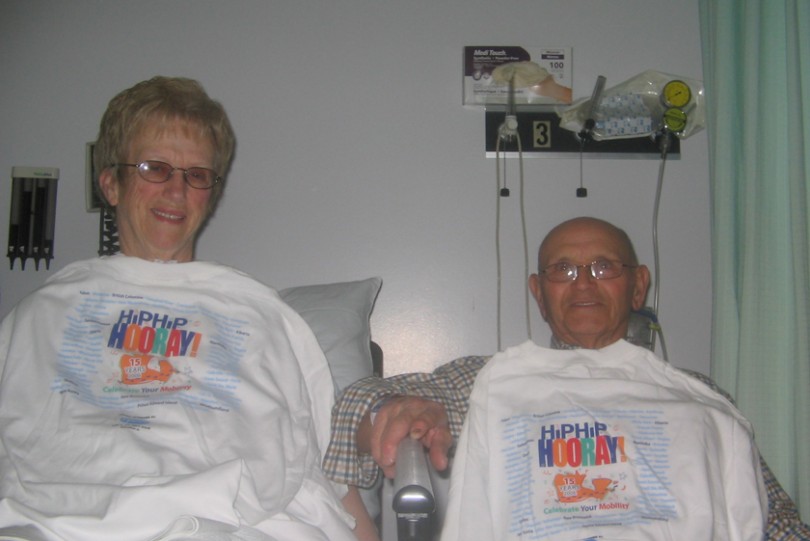 Max and Ollie Have Knee Replacements on Same Day

Many couples have his and hers towels, watches or wedding bands.  Max and Ollie Marsh, who live in Little Heart’s Ease, Newfoundland, have taken togetherness to a whole new level.  The couple, married 54 years, had knee replacement surgeries on the same day, May 11, 2007.

Both Ollie and Max, 77, had dealt with arthritis in both knees for years.  Going up and down stairs, and getting in and out of bed or a car proved particularly tricky.  Eventually, they traded their sedan for a minivan, because it was easier on their knees.

For Ollie, the pain was worse.  For the last three years, she could only drag her right leg when walking.  Without the knee replacement surgery, she figures she was close to being in a wheelchair.

Max says they wanted to get the surgery done at the same time to get it over with at once.  They recuperated in separate rooms on the 6th floor of St. Clare’s Mercy Hospital in St. John’s, and for four days could only talk on the phone.  Then Ollie was able to get up and about, and she started to fix herself up for a walk down the hall.

They spent a week in hospital, then took physiotherapy together for another six weeks.  Ollie says the difference in her mobility and outlook is like night and day.  “I can get up in the morning and go anywhere I want,” she says.

If they’re able, the couple plans to walk in the May 2008 Hip Hip Hooray! fundraiser in St. John’s, in support of the Canadian Orthopaedic Foundation.  “We want to do what we can to help,” says Ollie.

That includes offering this advice to others who are contemplating a knee or hip replacement.

“Don’t put it off – you’ll never regret it, and you won’t know pain any more,” Ollie says.  “Get it done when you’re young enough to have the strength and life to get up and go.”

Now that they’ve had one knee replacement, right for Max and left for Ollie, they hope to have their second knee replacement surgeries in 2008 – on the same day, of course.